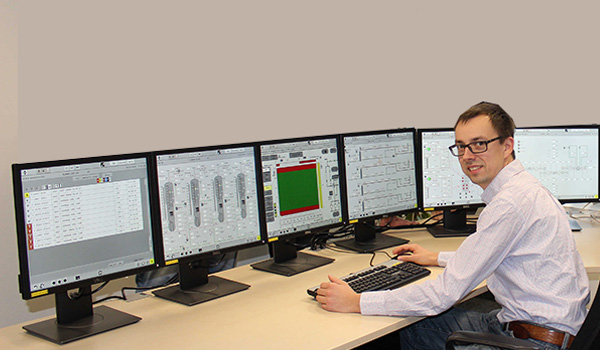 Framatome has invested in a forward-compatible engineering simulator known as Elvees to validate power plant design stages, notably for the Angra 3 power plant in Brazil over the next few years. While it takes time to adjust to the new practice, dynamic simulation is realistic, more efficient, and encourages better interaction between teams.

Your engineers started using Elvees in 2018, to validate control screens. What changes have you seen as a result?

Guillaume Hémery: for the first time, our teams have been able to see “real” monitors and navigate from one screen to another; that's changed everything. Operation of this power plant will involve 450 different displays, with each operator responsible for watching over between four and six of them. Imagining how that will work in practice on the basis of hardcopy documents is virtually impossible. As a result, validation is less relevant and less complete; there’s a much higher risk of having to make corrections later on.

Can you give an example of a situation in which dynamic simulation is clearly a bonus?

G.H.: I recall a screen that displayed data about several steam generators, to within one decimal place. A colleague familiar with real-life conditions told us that this data was constantly subject to small fluctuations. When we reproduced it on the interface, the display was very uncomfortable to look at, and in any case the figure after the decimal place was superfluous; so we decided to remove it. That kind of issue would have been impossible to detect on a hardcopy document. And correcting this once everything had been developed would not have been cheap…

G.H.: Indeed: it’s connected to the displays, which we’ve finalised, so the context is also realistic in this respect. Engineers can watch practical situations play out dynamically: what happens when I start this particular pump? Does the equipment start up again in the right order after a power cut? Are systems A and B exchanging the correct signals?

They can acquire an overall, intuitive knowledge of I&C, and it’s much easier for them to detect errors in specifications or implementations. What’s more, they’re not limited by the cost of tests: running a cable in a physical installation is expensive; using Elvees to do it costs virtually nothing.

How do people feel about this change after years of hardcopy-based validation?

G.H.: It takes time to change habits; not all of our people are using Elvees. That said, those who were initially sceptical are beginning to ask whether we could test this or that... Another virtue of the simulator is that it breaks down barriers and encourages collaborative work. We get together to watch the images and improve them, rather than each person studying hardcopy documents in their office. One colleague even told me that she found it to be a “fun” solution! There’s a serious point there: if validation is fun, people will inevitably be more motivated and concentrated.