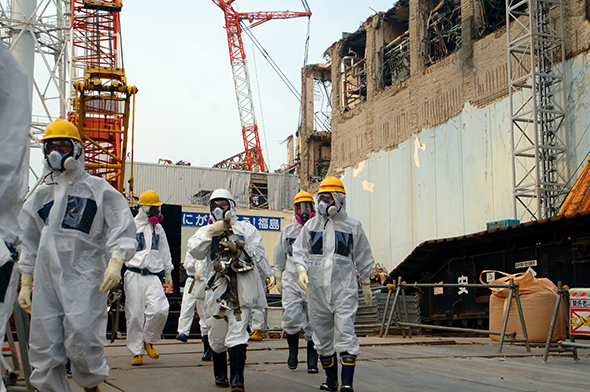 Five years after the Fukushima Daiichi nuclear accident, over 10,000 people are working on the site to make it safe and continue clean-up operations. They have had to invent most of the solutions being implemented in this unprecedented situation.

What do you find most striking about the huge worksite that has been undertaken at Fukushima since 2011?

Jean-Pierre Pervès: the speed with which the Japanese have reacted, and their determination to implement solutions even when their effectiveness could not be confirmed beforehand. It has taken them only two years to build a gigantic fuel handling structure over Unit 4 in order to recover fuel rods from the spent fuel pool as safely and effectively as possible. According to the operator, the fuel in the other three units’ spent fuel pools will have to be removed by 2020; recovery efforts have commenced for Units 1 and 3. However, these worksites will be more complex than for Unit 4, since they are more radioactive.

Another example is the Japanese solution for preventing contaminated water entering groundwater. In just one month, following a series of tests, they decided to build a frozen soil ‘wall’ around the four units, 1,400 m long and 27 m deep. If in 2016 this wall is indeed found to be impermeable, it would mean the unit foundations can be isolated from groundwater; this would considerably reduce discharge into the sea.

What aspects of the worksite can be said to be under control?

Core cooling has been in place since 2011, and is now easy to maintain, since the decay heat generated by the remains of the core is very low – three thousand times lower than at the start of the accident, immediately after the tsunami – so it is no longer an issue.

Another piece of progress is that the contaminated debris and rubble located outside the units have been removed and contamination is now largely contained, thus minimising radioactivity levels for workers on site. It is now possible to access 80% of the site without a full-face mask. This is all the more important because 11,000 people are working at Fukushima – three times as many as when the power plant was in operation.

However, it will not be possible to remove the remains of the three damaged units’ melted cores for many years to come. These areas are highly contaminated and highly radioactive, and access is hard even for robotic machines.

The fuel rod assemblies in the Unit 4 pool were removed at the end of 2014. When will the same process be completed for the other three units?

Unit 4 is a special case. On March 11, 2011, it was not in operation, and its core did not melt. This meant that it was relatively easy to remove the debris blocking access to the spent fuel pool.

The contamination levels for the other units are much higher. Almost all of the work will have to be done by robots. Tepco has said that it wants to finish removing fuel rods from the Unit 3 pool in 2017, and those from Units 1 and 2 in 2020. This work has commenced for Units 3 and 4. The cover structure for Unit 3 has already been built, and the automated handling gear for its fuel rods has already passed functional testing.

Another major challenge, decontamination of the core cooling water, has required three years of development. Why has it been so complicated?

This water is mostly saline, because initially, seawater was used. It contains many chemical contaminants. The main radioactive contaminants are caesium and strontium isotopes, but many other chemicals are also present. A number of chemical traps have had to be devised. To do so has taken time, but by the end of 2014, they were all operational.

The treatment solutions are working, but authorisation for discharge into the sea has not yet been granted. As of the end of 2015, a total of 670,000 m3 were being stored. There are two possible removal solutions: authorisation for discharge into the sea, subject to the agreement of fishermen, with considerable dilution in the Pacific – provided that the treated wastewater has low enough residual levels for discharge to be standards-compliant. An alternative solution would involve evaporation followed by recovery of the residual sludge in the form of solid waste.

You mentioned the 1,400 m-long wall around the site, designed to prevent groundwater contamination. How is that aspect of the work progressing?

Tepco has also installed upstream drainage to reduce groundwater levels. Downstream from the units, towards the sea, an impermeable wall 780 m long has been built to contain contaminated groundwater, and five drainage shafts have been built. Since autumn 2015, the recovered water has been treated, checked, and then released into the sea.

Does that mean this problem is well on the way to being solved?

It’s much too early to say. In early 2016, discharging into the sea was halted, because the residual contamination levels for the treated water were beginning to rise again. The effectiveness of the 1,400 m wall has yet to be proven: the Safety Authority has only just given its permission to freeze the upstream section, on February 20.

The Japanese still have to show that they can deal with the water beneath the units. They also have multiple stakeholders to take into account, in particular local fishermen.

Is the global nuclear community benefiting from experience feedback?

Yes, the Japanese have decided to open up internationally. They have already approached the US, with its experience from Three Mile Island, about corium recovery from the cores. They have set up an International Research Institute for Nuclear Decommissioning, supported by international experts from the US, the UK, and France.

In addition, Nuclear Safety Authorities and operators worldwide have already learned lessons from Fukushima. In France, €10 billion has been earmarked for work to improve the safety of power plants in operation, in particular to cope with the scenario of a simultaneous accident affecting multiple units on a single site. For this scenario, temporary evacuation from the vicinity of the power plant is permissible as a temporary precaution, but no long-term evacuation is acceptable. Even if the probability of such an accident is exceedingly small, we want to be prepared, and we’re setting aside the necessary resources to ensure that we are.

For more information about works at Fukushima: