The molten salt reactor, a new horizon for simulation 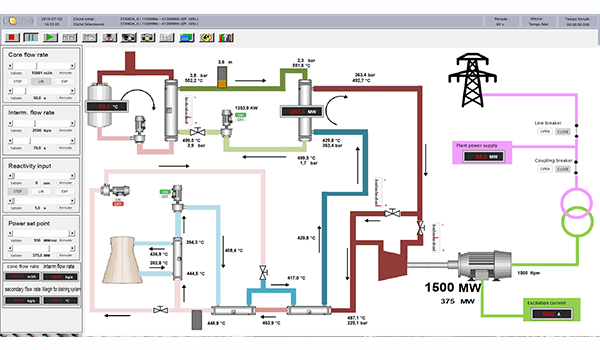 In collaboration with the CNRS laboratory, CORYS is developing a molten salt nuclear reactor simulator to interact with the process in real-time. This technology is now drawing renewed global attention due to its safety, performance and flexibility. This is enough to attract major industrial players.

Since the 1950s, the molten salt reactor has been studied by academics in several countries. But it has never been brought to industrial-scale before. Nevertheless, it is very attractive due to its inherent safety – particularly that the liquid combustible remains at atmospheric pressure - and its flexibility. The power supplied can double in less than a minute!

It uses uranium, plutonium or thorium salts, melted between 500°C and 700°C by nuclear reaction and set in motion by pumps. Their thermal power is transmitted via the second circuit of molten salts to a supercritical fluid that supplies turbines to generate electricity. The overall efficiency could reach 45%, 12 points better than a Pressurized Water Reactor (PWR).

"We have developed a core process simulation code, called LiCore, that theoretically confirms the full potential of this technology," said Elsa Merle and Daniel Heuer, researchers at the LPSC*, who have been studying molten salt reactors since 1998. “But to move towards industrial demonstrators, it is necessary to extend the scope of simulation and interact in real-time with the reactor. This is the purpose of the collaboration with CORYS."

Two student-engineer internships, in 2018 and 2019, resulted in July 2019 in a first demonstrator using ALICES®, CORYS' modelling tool. This demonstrator integrates four assemblies: the reactor itself described by LiCore, the electrical part, the intermediate circuit of non-radioactive molten salts and the supercritical fluid circuit*. Two groups of heat exchangers are also represented.

"ALICES® confirmed its versatility and robustness on this occasion," emphasizes Jean-Christophe Blanchon, project manager at CORYS. “We were able to encapsulate the LiCore code developed by Axel Laureau at the LPSC. Similarly, our libraries have enabled us to model supercritical fluids, which are not found in conventional reactors.”

Subsequently, the simulation depth can be improved to more accurately represent the electrical distribution network. The flexibility of the molten salt reactor would allow it to instantly adjust its power to load fluctuations. However, these will increase with the rise of renewable energies.

Shutdown, startup, procedures, and safety analyses: everything can be studied

In the shorter term, LPSC researchers are using this tool to push their work further than ever before. "LiCore is designed at normal power speed and executes a scenario written in advance, we use it to carry out systematic studies," says Daniel Heuer. “The ability to simulate all scenarios and interact in real-time adds a new dimension.”

For example, the demonstrator will be able to carry out start-up, shutdown, core filling, incident or accident piloting. These are opportunities to better understand the molten salt reactor and to clarify its future design in terms of intermediate and energy conversion circuits, including I&C.

Another theme is safety analyses and procedures. "On a PWR, the relevant pressure and temperature ranges are well known," explains Elsa Merle. “With molten salts, which remain at atmospheric pressure, everything has to be reinvented, this time by changing the temperature and speed of the fluid." She will have the opportunity to work on it as part of the European Samosafer project, which begins on October 1, 2019.

Waste from existing reactors that can be used as fuel

The simulator will be supplied to LPSC and Framatome, who already discovered an intermediate version in 2018. CORYS and LPSC are also considering putting it online in an interactive mode, without access to the code. "The molten salt reactor has a very high level of intrinsic safety. Decision-makers and the general public must be convinced if it is to become socially acceptable." This simulator is also of interest to the International Atomic Energy Agency.

In their industrial version, these reactors would deliver 3000 MW of thermal power or about 1300 MW of electrical power. Smaller versions (Small Modular Reactor) are also under review. As a fuel, they would use various nuclear materials such as plutonium and thorium, or waste from existing power plants: depleted uranium, reprocessed uranium, other actinides and so forth.

This is not the least virtue of this technology, which many countries are looking at. China is about to invest $3 billion to build a demonstration reactor in the Gobi desert. Start-ups, specialising in molten salt reactors, are flourishing in the Anglo-Saxon world. CORYS is proud to be part of this movement as well, which may be initiating a major shift.