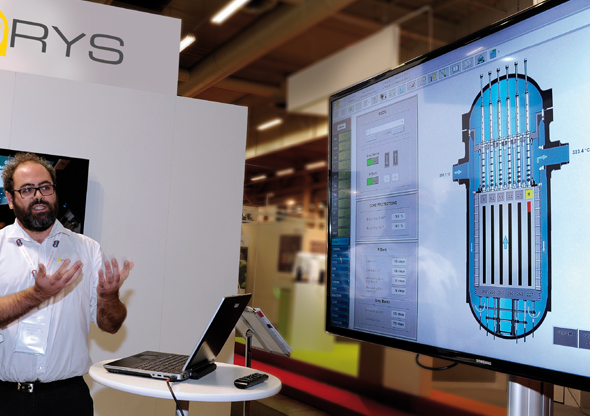 The advent of an integrated suite of training simulators running on standard PCs is transforming initial training for operators, technicians, engineers, junior managers on induction courses, and others. These interactive resources, validated on the basis of real-life plant data, have improved trainee involvement as well as delivering faster, more thorough learning. Camille Bonnard, in charge of CORYS’ PWR software suite, explains.

X-PWR 1300 : anomalies, incidents and accidents:
“We reconstructed the Three Mile Island scenario, and then played it out”

“I’ve been using this software for courses such as the Nuclear Trainee Program, put on each year by Engie for some fifty new recruits, including both engineers and managers.

On a typical five-day course, I devote the first three half-days to conventional discovery of how a PWR works: a PowerPoint to present the key plant components, drawings on the board to describe interactions, and pen and paper for exercises and summaries.

C-PWR takes the stage on the afternoon of the second day. Trainees work either individually or in pairs on a PC. The software gives them a simplified, but highly accurate, dynamic display of the entire unit. They can take the controls, perform actions and observe.

Visualizing, testing, and observing the physics of the reactor in real time

Gradually, I introduce them to the various complexities of operation. Initially, I configure the software so that just two parameters interact, such as pressure and primary circuit temperature. The first thing they find out is that these temperature-pressure interactions may vary greatly in terms of intensity and speed. They are no longer merely learning abstract notions, but rather visualizing, testing, and exploring the reactor physical behaviour in real time.

After that, I introduce other phenomena, adding further layers of interaction. Let’s suppose, for example, that they have started a reaction, as part of an exercise dealing solely with the primary circuit. I broaden the scope to the secondary circuit, and the temperature-pressure interactions in both circuits begin to have an impact on the electrical power generated. Things start getting complicated, and happen faster – and it’s not long before the trainees begin to be thrown by some counter-intuitive phenomena.

Sooner or later there always comes a point at which wholly manual multi-parameter control becomes too much for them, and they can no longer monitor everything. So then I again let the trainees experiment and observe for themselves, following which they activate Instrumentation and Control, having been reminded of its purpose. There’s no better way of getting them to understand what it’s there for.

Once an exercise has been completed, I sum up and go back over it, reminding them of some basic theory if needs be. Then the exercise is played back, this time for the group as a whole, enabling them to discuss its contents. This allows them to check they’ve understood properly, and also develops team spirit.

I’m constantly struck by trainees’ levels of attention throughout these courses. Learning is lively, stimulating and effective. Multiple-choice tests reveal an excellent degree of memorization. In their evaluations, trainees invariably report that this session on C-PWR 1300 is the most hands-on part of the course, and the most useful subsequently in their day-to-day jobs.” 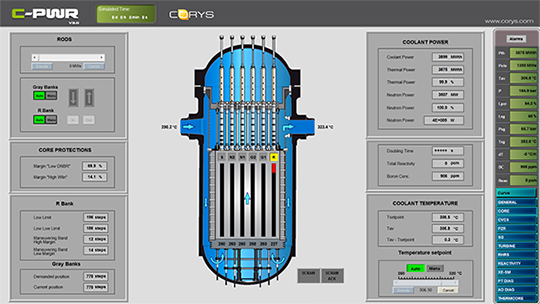 “The purpose of M-PWR 1300 is to allow trainees to control one of the plant systems, or a specific function such as electrical distribution, various controls, the xenon effect, and so on. There are seventeen different modules with alternatives for various reactor series. This training is directed at maintenance technicians, automation engineers, and operators who wish to extend their knowledge.

Once again, the strength of the solution resides in being able to activate part of the reactor, with a restricted focus but an extremely high level of detail, fully in line with actual physical data.

I&C: no longer a black box

Trainees can see for themselves that if they decide to reduce the pressurizer set point, the water temperature in the primary circuit changes. If they choose to reduce electrical power, they will see that the entire system reacts, and understand why safety mechanisms are activated. Everything is real and tangible, unfolding before their eyes – and there’s the ability to experiment through trial and error.

Another possibility with a huge educational potential is being able to see how Instrumentation and Control works at the scale of a simple operation.

Trainees often see I&C as a black box: you put a value in at one end to achieve a given output at the other, but without knowing what happens in between. M-PWR 1300 allows the sequence of actions to be revealed, and helps explain why they produce the result they do. That’s one of the reasons we’re sometimes called upon to train academics taking their first steps in nuclear I&C.

I use this PC-based simulation tool on PCs for individual work, allowing trainees to apply what they’ve learned, measure effects, encounter difficulties, and try out various strategies. In addition, I use video-projection in groups after individual work, to replay scenarios and explain key aspects, as well as web-based deployment for distance learning.

One use of the latter is for EDF-UFPI, training technicians hired to supervise worksites at nuclear power plants. Previously, this type of training took two weeks, one of which was devoted to reminders and refresher teaching. Now, this preparatory phase takes place using an online version of M-PWR – and only one week’s worth of classroom training is required.” 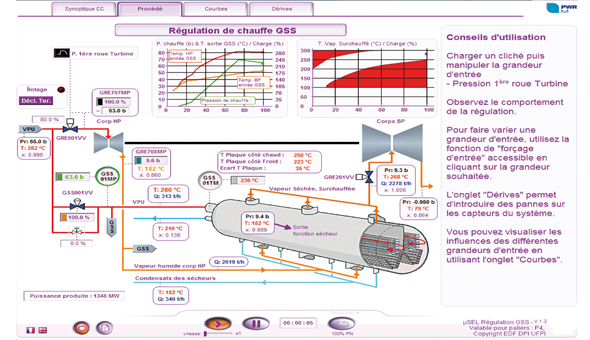 Anomalies, incidents and accidents
“We reconstructed the Three Mile Island scenario, and then played it out”

“X-PWR 1300 has been available since late 2014. I had the opportunity to present it to five US accident operation experts, who had a chance to use the solution during a workshop devoted to technical discussions.

For the occasion, I reconstructed the Three Mile Island accident scenario, including the various failures recorded, the inaccurate sensor readings, the operators’ difficulties in interpreting the data available in the control room, particularly as regards the pressure valves, and so on.

The participants tested the scenario and confirmed both its realism and its educational value. They were able to replay it with certain adjustments; for instance, checking that the primary circuit was properly filled: it seems likely that at the time, this would have prevented the partial core meltdown.

It’s generally acknowledged that no other PC-based training software goes as far in terms of realism, accuracy and interaction. Trainees can be confronted with hands-on situations without recourse to a fullscope simulator: I have one minute to decide between action A and action B: which should I choose? I choose A: what physical phenomena will occur? If I had chosen B, what would have happened?

Operators, safety engineers, and crisis teams can all use X-PWR 1300 to practice and maintain their reflexes in the face of extremely rare circumstances in which approximation is not an option. While fullscope simulation remains vital to achieve the immersive effect, PC-based software has the advantage of being accessible at any time – and regular training is how appropriate actions at times of crisis can be ensured.” 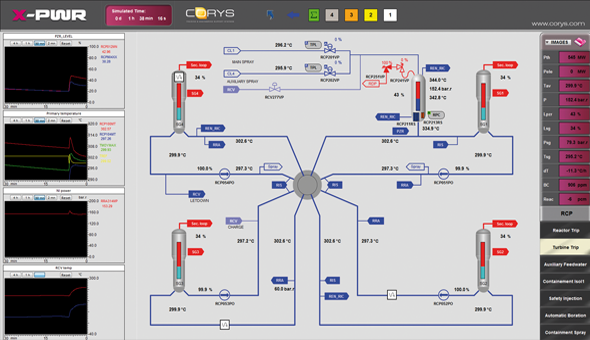 Basic physical principles and standard operation of a PWR. The whole of the unit is covered, without going into detail.

17 modules, each devoted to a specific system or function such as regulation, electrical distribution, etc., with a very high level of detail.

Anomalies, incidents and accidents, including full coverage of the unit, and Instrumentation & Control very similar to that used in real life

With its new Cannington Court campus, EDF Energy is intending to explore new learning methods and strengthen the effectiveness of training using innovative digital resources. Mick Hogben, Learning and technology manager, has decided to opt for CORYS’ PWR software, and tells us more about it.

“We want to train operators, maintenance technicians, engineers and suppliers in the fundamentals of nuclear reactors. We’re convinced that theory learning is not enough: trainees need practice. But if they were to start directly on a fullscale simulator, they would be overwhelmed by its complexity. Instead, we’ve opted for PC-based simulation with modules geared to specific learning needs.

5 weeks’ training instead of 8

We’re planning to work in groups of 12, with each person having their own PC. The foundation course will last 5 weeks, compared to 8 when it was PowerPoint-based. During the 5-week period, trainees will have daily sessions using C-PWR software, classroom sessions, group work, tutorials, and so on.

One key point is that we let them experiment and learn by trial and error. They can follow their own path, launch an inappropriate operation, retrace their steps, start another procedure, etc. Only later do we deal with actual procedures.

I know that the traditional method involves studying one procedure after the other and staying within the limits. However, the risk is that people learn without properly understanding – and then make mistakes without realising how serious they can be. We prefer to broaden our trainees’ horizons. We want them to understand the reasons behind these procedures for themselves, see why they exist, and realise how they contribute to operational security.

At the end of the course, we’ll evaluate what they’ve learned with 50 multiple-choice questions – the same one given to American operators after an eight-week course using PowerPoints. That will be a good way of seeing whether we’ve made the right decision!”