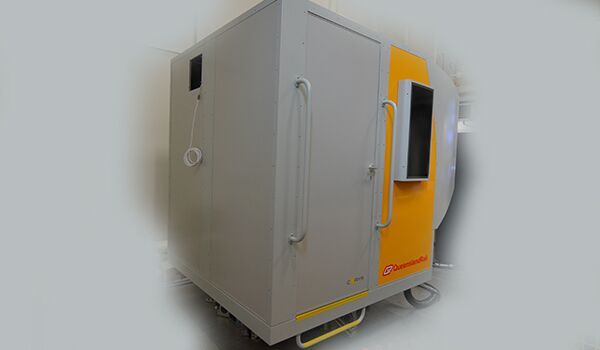 The fullscope cab simulator to be delivered in early 2017 to Queensland Rail, Australia is three times lighter than a conventional simulator. Not only that – it has a 6-DOF motion platform, offers training for five different trains, and didn’t cost any more than usual.

Queensland Rail’s original problem was not one of weight but of height clearance – just 3.4 m in its training centre. That ruled out the option of installing a cab on a standard 6 DOF motion platform, since the latter can easily be up to 5 metres high.

However, the maximum weight for this motion platform turned out to be one tonne, whereas a conventional simulator cab weighs about twice that!

A honeycomb structure instead of steel

As a precaution, Queensland Rail set the total weight limit for occupants at 260 kg, allowing a good margin for larger users. That meant the cab had to weigh no more than 740 kg – and thus required a complete redesign in order to bring its weight down by more than a tonne.

The engineers decided not to attempt to save weight on the driver’s seat or controls: it was important for these to be identical to the real-life trains, so that trainees could familiarise themselves properly with the driving environment.

Instead, the efforts were directed at the cab’s structure. Out went the 3 mm sheet steel panels, to be replaced by a honeycomb aluminium structure.

A prototype for the price of a conventional cab

This ultra-lightweight material is of course more expensive. However, the panels are delivered from the factory powder-coated, painted, and cut to size. Not only do they look good; they also do away with the welding, milling, and painting stages.

At the end of the day, despite being a prototype, the 740 kg cab has ended up being no more expensive than the steel version.

Its lightweight structure does however require the two occupants to be positioned very precisely, especially if their combined weight is close to the 260 kg maximum. The trainee must stay in the driver’s seat, while the instructor remains standing in a strictly delineated area. This ensures the cab’s centre of gravity stays in just the right place.

Trainees have a realistic view forwards (38° vertical and 44° horizontal FOV), as well as side views that show stations passed through, their names, passenger movement on the platforms, and so on.

The lightweight simulator allows users to practice on no fewer than five train models in service with Queensland Rail.

The main driving data is displayed on 5 touchscreens, with a specific version for each train.  Trainees find everything where they expect it to be: speeds, pressure settings, alarms, the train management system, passenger information, and so on.

There is also a ‘Train Performance Display’, not present on actual trains. This features an eco-driving system developed by CORYS, with advance notice of inclines, downhill stretches, signals, points, and so on.

With Queensland Rail, CORYS has shown that a lightweight fullscope cab can be installed by dint of using different suppliers, design rules, and industrial processes.

This technical achievement opens up the way for a broader range of fullscope simulator scenarios based on a compact 6 DOF motion platform. The lightweight solution means floor loads are three times smaller.

Operators, who formerly had to abandon plans for fullscope simulators due to a lack of appropriate premises, or funds to build a new training centre, can now think again. The Queensland Rail experience can be repeated at will for other projects.