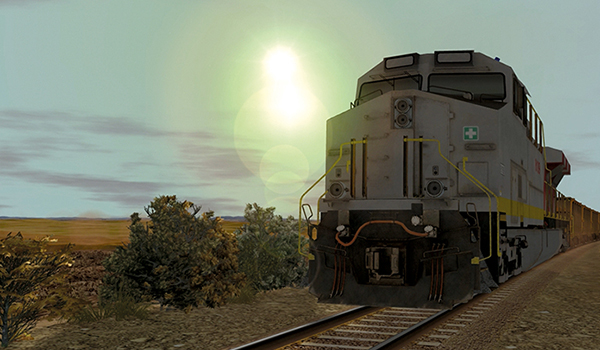 The latest in computer-generated image technology is helping our train simulators deliver the same immersive experience as Flight Simulator®, only on solid ground. The physical environment is represented in extreme detail, with image resolution down to 5 centimetres. All elements on the network are also georeferenced. Add the effects of wind and sunlight and the presence of passengers, and you get a strikingly realistic virtual world.

Flight Simulator® is at the state of the art in terms of realism. Which raises the question of what the same level of realism can do for train, subway, and tramway drivers. According to CORYS’ Marc Toubin, “For training to be effective, the experience has to be believable. Plus, hyper-realism has a positive impact on route learning. When the simulated route very closely replicates the terrain, drivers can learn exactly where they will need to take extra care on their actual routes from the safety of a simulator.”

The CORYS engineers and technicians behind the new computer-generated images are proud to be in the same league as Flight Simulator®, even if there are some major differences between replicating air and ground environments.

Each scene rendered in minute detail

What strikes you right away with the new computer-generated images is just how realistic the environments inside the simulators are. Everything in the real-world environment – houses, buildings, bridges, bodies of water, hills, mountains – is rendered in minute detail and nothing is missing. “When you show an experienced driver a scene chosen at random, he or she immediately knows what section of track it is,” said Marc.

Less experienced drivers can easily pick out important landmarks that can help them learn new routes more effectively. Take the example of a service station that marks the exact spot where the drivers needs to start reducing speed before an upcoming curve. Because the service station in the simulated environment is the same as the one on the actual route, the training runs will be realistic and, therefore, more effective at helping the driver memorise the right responses.

New airborne and ground-based image capture technologies were used to gather the data needed to provide this level of realism. Four cameras mounted on a train traveling at 110 kph can capture 360° high-resolution footage of the environment.

“Data acquisition is no longer the main problem, data processing is. Once you capture the images you have to be able to automatically render them in the simulated environment. The more realistic you want that environment to be, the more data you have to extract and process. Artificial intelligence, one of our main areas of expertise, can do this, and AI algorithms and validation processes are what enabled us to produce these hyper-realistic environments.” 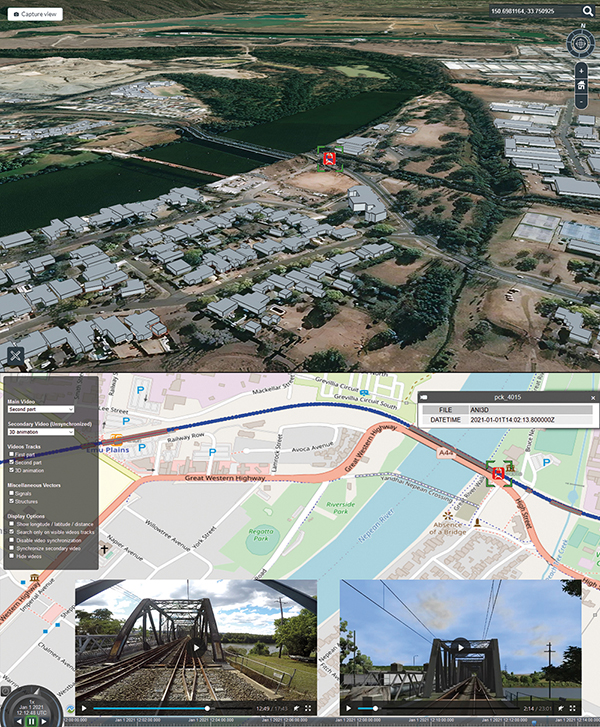 Atmospheres that look and feel real

The computer-generated images had to realistically replicate the appearance of the actual environment, of course. But that’s not all. The atmospheres also had to feel real. This meant adding in dynamic features. Urban environments, for example, are populated by constantly moving pedestrians and cars. Train station platforms are abuzz with passengers. Even landscapes are characterised by changing patterns of light and shadows.

Marc explained, “This is crucial to the immersive experience. Achieving this level of photorealism is time- and labour-intensive. And not everyone has the know-how to do it. But it is worth it, as the results truly are striking.”

In CORYS simulators, wind can be seen blowing through trees and kicking up clouds of dust; sunlight glints off the surfaces of lakes and other bodies of water. When the sun goes down, building façades get a variety of shadows – just like in real life – instead of a uniform coat of darkness. As lights switch on inside, the windows glow softly. A variety of cars, lorries, and motorcycles can be seen travelling on the roads and highways along the tracks. These are just some of the details that make CORYS environments so realistic.

When it rains, drops either linger on the windscreen, run off, or are removed by the wiper. When the train comes out of a tunnel, the driver is blinded for a brief moment as his or her eyes readjust to the light.

Train station platforms can be empty or crowded, with passengers standing at a safe distance or, on the contrary, too close to the edge of the platform. At rush hour, passengers crowd around the doors. 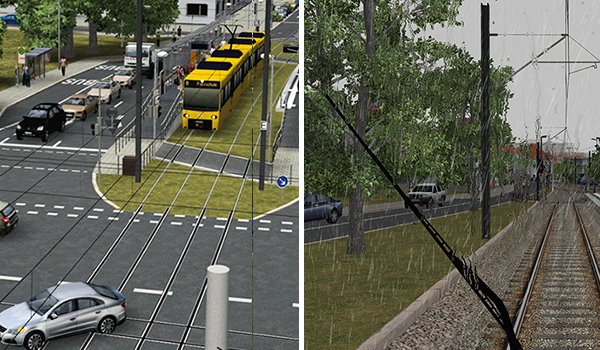 On board the train, the learner looks through virtual surveillance cameras to see passengers get up from their seats as the train pulls into the station, and then get off and walk down the platform. “The CORYS passenger exchange module is the most sophisticated on the market,” said Marc. 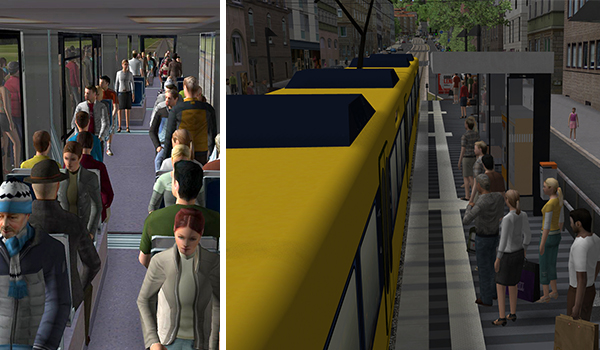 Every component of the network is georeferenced

In addition to mining image files for data, the simulated environments in CORYS solutions also leverage data about the network. Tracks, switches, signals, catenary poles, and electrical boxes are all accurately georeferenced. The platforms are represented to scale and include the actual ground markings – such as for the number of cars.

Learners are immersed in an environment that is virtually identical to what they will encounter from the driver’s cabin. Everything – from braking, pulling into a station, and stopping to letting passengers on and off – is laid out exactly as it would be seen by the driver on a real train. There are even realistic optical effects. “If a signal is hidden behind a catenary pole over a few dozen meters of the train’s trajectory, the effect is reproduced in the simulator,” said Marc.

Data acquisition and processing have become so accurate that it will soon be possible to use shared asset databases for simulation, engineering, and asset management. 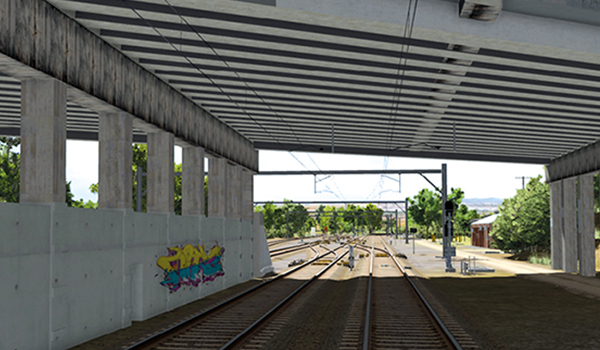 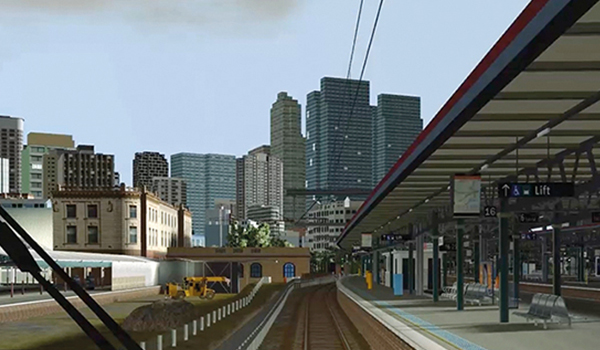 Demand for custom routes on the rise

Railway operators are now investing in the development of custom route simulators for their in-house route learning needs to leverage the full benefits of the kinds of hyper-realistic environments CORYS can develop. The vast majority of route learning training takes place on the simulator. Before they ever set foot in a real train, drivers can practice their routes safely in sun, rain, fog, and snow.

Drivers in training can determine which sections of track are the trickiest, pick out visual cues in the surrounding landscape, and memorise sequences like accelerating out of a curve, for example.

CORYS is rolling out some of the most complex projects ever in response to rising demand for custom routes. Recently, for example, the company delivered 500 kilometres of custom routes complete with 189 stations and 31,000 georeferenced signalling features for the Sydney, Australia, commuter rail network.

And, although they are complex, these 3D virtual environments are easy to update. The Brisbane, Australia routes are updated twice a year for work on the track and changes in the environment like new buildings. This way, drivers not only get a hyper-realistic environment, but they also get one that is up to date with the latest changes in the real world. 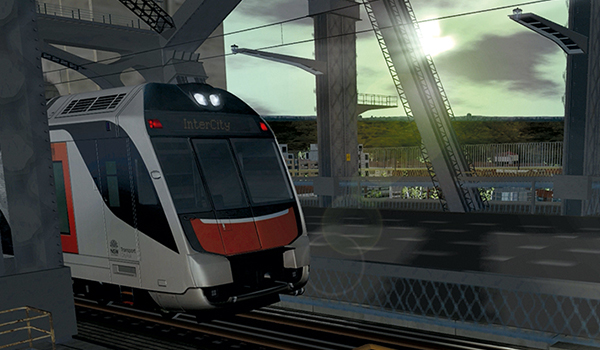