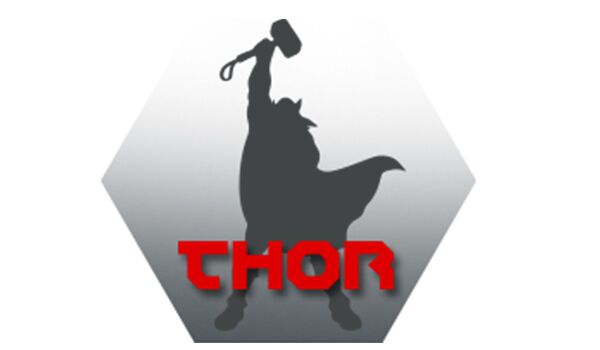 THOR is installed on more nuclear power plant simulators than any other advanced thermal hydraulics model.  The THOR models have been benchmarked extensively through more than 80 installations world-wide.  The fidelity and robustness of the THOR models is well-established. Below are comparisons between THOR simulation models and actual plant data for a turbine trip event at Browns Ferry Nuclear Station.

In addition to the basic solution of the fluid dynamics for flow networks, the THOR contains a number of specialized models, which are executed as an integral part of the simulation. The models are for:

Heat exchangers, including condensers and boilers

The system is divided into control volumes (cells) and conduits (flowpaths). The flowpaths connect the cells. Conservation equations for one-dimensional flow for the mass of steam, water, non-condensable gasses, trace components, and energy for the gaseous and liquid components, are integrated for all the cells. The flows in flowpaths are computed from the transient momentum equation for the fluid mixture. For two-phase systems, the relative velocity between the phases is evaluated from the drift flux model.

The model uses best-estimate constitutive relationships for heat transfer, phase-change, drift flux, choked mass flow rates for steam/water, and solubility of non-condensable gasses. Because of the completeness of the equations of state, constitutive relationships, and conservation equations, the model can be used to simulate most practical problems of fluid dynamics, including compressible gas dynamics involving wave phenomena, choking, and combustion. Natural convective currents, driven by temperature differences, are inherent in the model. However, for connections to dead-end compartment special care must be taken to ensure that proper exchange of mass and energy and mass can take place. This can be accomplished both by extra flowpaths with properly imposed flow, and by specifying diffusion of heat and trace element between cells.

For nuclear reactors the simulator thermal hydraulics models are valid as long the external geometry of the reactor core remains intact. The effects of ballooning and disintegrating fuel rods are not considered. The application of the model is appropriate for all fluid systems typically found in the power generation industry.  This includes the nuclear steam supply systems, balance of plant systems, support systems, and heating and ventilation systems for nuclear power plants as well as fuel systems, gas turbines, and steam systems for non-nuclear power generation plants.

The chief advantages of the THOR explicit method of integration are the simplicity of the code, the short execution time per time step, and the fact that the execution time is proportional to the number of control volumes in the simulated system.

(Most simulators use implicit integration methods for which the integration time is longer per time step, and, at best, proportional the square of the number of control volumes.)

Because some sub-systems may require very short time steps for numerical stability (small cells connected with wide flow paths), the THOR code has the ability to execute these sub-systems at a high iteration rate. Thus, for example, if the system wide iteration rate is 100 cps, certain sub-system may be integrated at 200 or even higher rates. This feature saves computer power by avoiding having to integrate the whole system at the higher rate.

Correlations for rate of solution/dissolution of non-condensable gases

Decay equations for radioisotopes in coolant

Source of N16 by neutron activation

Creation of hydrogen and oxygen by radiolysis

Recombination of hydrogen and oxygen

A recent development has been the introduction of the THOR 3-G models, which are developed and maintained using a graphical modeling environment.  This has made the THOR models much easier to develop and maintain for end users.  The THOR 3-G tools will be used to develop the Bruce 7 models. Through this tool the nodal diagrams are drawn, and all model components, volumes and flowpaths are defined.  After the drawings are completed they are used to generate the model.

Initialization file for the THOR constants

The drawings may then serve as the repository of all of the data used to develop the model.  Changes to data or model constants are tracked through the drawings database, providing configuration control.

Drawings may be viewed live while the models are running to provide data for development and troubleshooting.  Below is a typical THOR 3-G drawing with a component data definition menu.