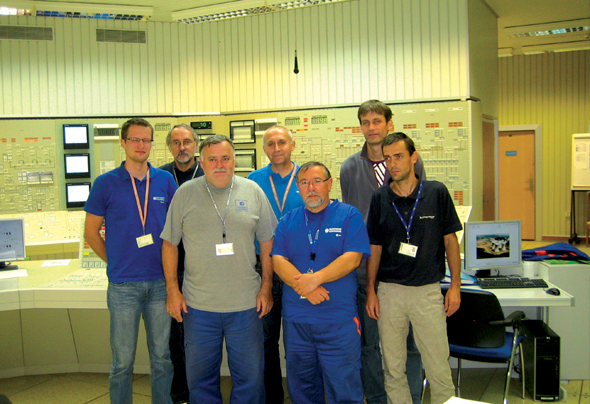 Commissioned in 1985 by GSE Systems, units 1 and 2 of the Mochovce simulator have been fully renovated by CORYS. Renovation has involved migration to a Windows PC platform, a new instructor station, replacement of the 10,000 inputs/outputs, and new models for the core, reactor cooling, the steam generator, turbines, the containment vessel, condenser, electrical systems and so on.

Who do you train on the simulator?

The simulator is used very intensively: there are three shifts a day, from 6am to 10pm. This is because we have two types of users.

The 56 plant operators come here for at least two weeks a year, to maintain their knowledge and in some cases for training on new positions. At the same time, we also are welcoming for the 56 future operators of units 3 and 4, which are currently under construction.

They will be fairly different from the first two units, but the specific simulator which is being developed is not ready yet. So we are beginning the training using the existing tool.

Was it easy to get to grips with the renovated simulator?

The operators didn’t see any difference; the renovation didn’t change anything for them. For the ten instructors, it took them just two days to familiarise themselves with the new resource. The T-REX instructor station is so simple that adjustment is easy.

And that’s just as well, because we are very busy: at the same time as delivering training, we also have to move our scenarios from the old simulator to the new one. Once we’ve finished doing this, we’ll see if we need to alter our programmes.

What do you think of the new models?

They behave much better – they’re a lot closer to reality. Examples of this include the containment vessel model and the reactor core model: the neutronic model is now 3D, which allows a far more accurate simulation of the flows.

Similarly, the secondary circuit is now modelled with the same precision as the primary circuit: you can observe boiling phenomena in the power supply circuit during incidental or accidental transient states.

Does the new simulator open up new possibilities for you?

With the old thermohydraulic model, the simulation of operation with open reactor pressure vessel was possible but presented some difficulties and restrictions. With the new model, the simulator behaviour for this state is more realistic and we are able to run refuelling scenarios.

“We are discovering a whole new way of working”

Another new feature is that one of the applications on the instructor station allows us to compare our data very easily with that of the old simulator, for benchmark calculations and data from the power plant. These comparisons are essential in understanding the improvements provided by the new models and analysing the differences.

What other aspects have become easier to use?

The Schedule application, used to create scenarios and exercises, makes the task a lot simpler for instructors. Insight, another Windows application, allows us to plot graphs, monitor variables and recover data. We’re discovering a whole new way of working, one that is already giving rise to ideas for improvements to the instructor station. But it’s too soon to be able to consider those properly.