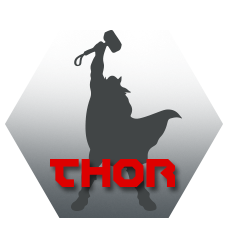 Since being introduced in 1996, the THOR advanced thermal hydraulic and neutronics models have been installed on more simulators than all other advanced models combined.

As a result, THOR models are the most thoroughly tested and benchmarked models in the industry. THOR has modeled reactor coolant systems, reactor cores, and steam supply systems for numerous PWR's and BWR's.

In 2001 the first THOR-BOP models were installed on the Dominion Surry nuclear plant simulator, for the first time extending the high fidelity of a true two-phase, five-equation, non-equilibrium numerical solution throughout the secondary plant system models. Since then, numerous simulators have contracted to install THOR-BOP.

As computer processing power continued to increase, it has become possible to extend the THOR models into other areas, including the containment, HVAC and radiation transport model. THOR is used to model any fluid system, be it liquid, gas or two-phase.