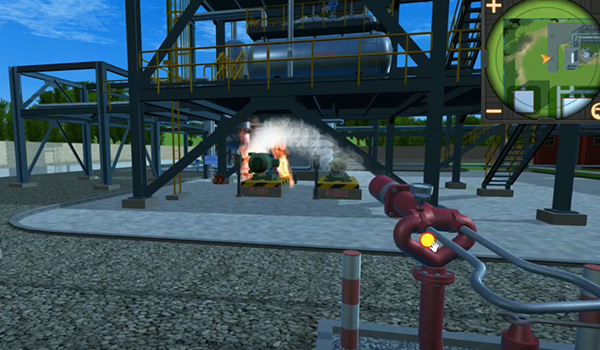 Operators no longer need to go out in the field to get to know an installation, locate valves, or practice emergency procedures. Today, they can train using a 3D immersive model connected to a process simulator: this relays the effect of each operator action on pressure, temperature, and other settings. The innovative solution has now been deployed at a Saudi ethane recovery unit.

Field operators usually train with 2D simulator; however, monitors fail to convey distances, distort perspective, and cannot imitate gravity. With 3D immersion, while the environments operators explore are virtual, they are nevertheless much closer to the ‘real world’.

In immersion, moving from one place to another happens at walking speed, giving a better idea of journey times. Changing levels involves climbing a staircase. Walls and pipeworks cannot simply be walked through; they have to be walked around.

“This isn’t a video game: it’s a real life representation,” explains Ludovic Cariteau, INDISS PLUS project manager for CORYS. “Everything operators perform in 3D will be performed in their jobs too: memorising a site layout, identifying the shortest route between two points, locating a valve hidden behind a staircase, and so on.”

The immersive experience doesn’t end there, either. Leaking gases and liquids generate clouds, formed using a dispersion model, and rising or descending depending on the product density. Any action performed by the field operator on a valve or a local control panel is captured by the process simulator. The operator can then observe the positive (or negative) consequences of their actions on key parameters, including for incidents and even accidents.

Already some thirty installations in China, Russia, and the USA

It’s by no means CORYS’ first foray into the technology; its Chinese fully owned subsidiary HKD is a pioneer in 3D modelling. Since 2006, it has supplied some thirty sites in China itself, Russia, and the USA. The first reference in Middle East is for the Saudi Aramco’s ethane recovery unit at Uthmaniyah, in Saudi Arabia.

“Since the unit is recent, we were able to start with its 3D engineering model in SmartPlant,” says Ludovic Cariteau. “We have a series of ‘translators’ that can convert any CAD format.” The 3D immersive model can also be developed based on site photos or video, for old site if such files don’t exist.

The tricky part: interconnecting 3D and the process simulator

It’s important to bear in mind that the 3D aspect is quite separate from the process simulator. Indeed, it can be added subsequently to existing simulators.

The critical point in such projects is the way the two models interconnect. Valve and their on-site panels, complete with their exact location, tag numbers, and the effects they have on the reaction underway all need to be take in into account. This painstaking work is carried out by CORYS process engineers: only they are able to judge whether the data they are integrating is consistent with the unit’s physics and conformation.

What types of training can operators receive using this tool? Firstly, as explained earlier, it can be used to introduce them to a site or equipment to be operated, so they can familiarise themselves with distances and optimum routes. Of course, this can be done on site, too. But in countries where temperatures can often get above 40 °C in the shade, or in Arctic conditions, operators venture outside as little as possible.

Ideal to train for start-ups, shutdowns, and emergency procedures

The second type of training involves learning and reviewing procedures relating to safety, emergencies, and installation start-ups and shutdowns (StandardOperating Procedures – SOPs). Operators rarely have to practice and follow these procedures in real life, but must be quick and accurate when they do. Training for such circumstances in 3D is highly realistic and safe, and is ideal for developing muscle memory.

The immersive approach is suitable for training new recruits, too. It’s also useful after changes in procedure, introducing field operators to any new actions to be performed.

The 3D/process simulator interconnection also makes it possible to train field operators alongside their colleagues in the control room. “During operations, these teams are in constant radio contact with each other,” says Philippe Thiabaud, sales manager for the Oil & Gas business unit. “To cooperate well together, they need to build team spirit, understand each other, and share the same procedures. What better way than 3D immersion to train them together and boost efficiency?”